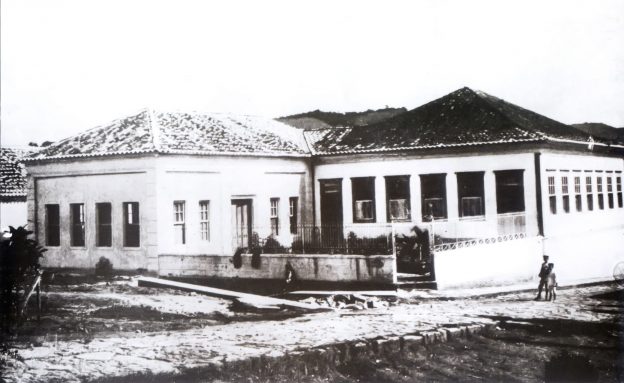 The Federal University of Itajubá (UNIFEI) was founded in November 23, 1913, as the Electrotechnical and Mechanical Institute of Itajubá (Instituto Eletrotécnico e Mecânico de Itajubá – IEMI). A personal endeavor of lawyer Theodomiro Carneiro Santiago, it was the tenth Engineering School in Brasil. IEMI soon stood out for its formation of highly qualified professionals, specialized in electrical systems, mostly in generation, transmission and distribution of electricity.

The then Institute was officially recognized by the Federal Government in 5 January, 1917. Initially, the course lasted three years, going into four in 1923 and, in 1936, it was redesigned, becoming the Electrotechnical Institute of Itajubá (Instituto Eletrotécnico de Itajubá – IEI) on March 15 of that same year. In January 30, 1956, the Institute became a Federal institution.

The institute was then renamed to Escola Federal de Engenharia de Itajubá – EFEI (Federal Engineering School of Itajubá) in April 16, 1968.

Furthering its expansion policy, aiming to meet a broader and more diverse national and regional demand of professionals in the technological area, the institution began its attempt to become a specialized university in the technological area. This goal became closer to achievement in 1998, by more than tripling its number of undergraduate programs, going from two programs to nine.

Through a pioneering partnership between the local government (Municipal Government of Itabira), the private sector (Vale Company), the Ministry of Education – MEC and the Universidade Federal de Itajubá implemented a new Campus in Itabira, whose activities started in July 2008 with its first admission exam. The Technical and Financial Cooperation Agreement, signed between UNIFEI, Vale Company and the Municipal Government of Itabira, ensured the construction of the university campus and laboratories assembly.

Parallel to the consolidation of its Itabira Campus, the University kept on expanding its main campus in Itajubá, adding more undergraduate and graduate programs.

UNIFEI has always acted jointly with the country’s development, contributing for a jump from a predominantly agricultural Brazil, in 1913, to the current era of scientific and technological knowledge.