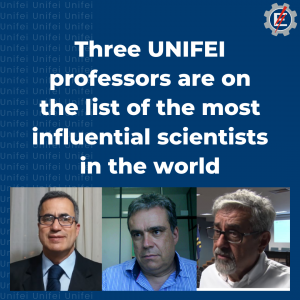 Professors at the Federal University of Itajubá (UNIFEI) Antonio Carlos Zambroni de Souza, from the Institute of Electrical Systems and Energy (ISEE); Antônio Fernando Branco Costa, from the Production and Management Engineering Institute (IEPG), and Paulo Fernando Ribeiro, also from ISEE, are on the list of the most influential scientists in the world, according to a research conducted by Stanford University, in the United States.

The study used data that show the impacts of each researcher throughout his career and also in the year 2019. Altogether, 600 Brazilian scientists are part of the list of the 2% most influential in their area of expertise.

UNIFEI congratulates them on the deserved international recognition.

The Journal Plos Biology published, on October 16, 2020, the database of a study that analyzed the world ranking of scientists, which lists the 100,000 most influential scientists until 2019.

The research entitled “Updated science-wide author databases of standardized citation indicators” – https://doi.org/10.1371/journal.pbio.3000918 – was conducted by a team at Stanford University, led by John Ioannidis. For the study, citations from the Scopus database were used, which updates the position of scientists in two rankings: the impact of the researcher over the career (Table-S6-career-2019) and the impact of the researcher in a single year, in this case, 2019 (Table-S7-singleyr-2019).

The complete study can be accessed through the link: https://journals.plos.org/plosbiology/article?id=10.1371%2Fjournal.pbio.3000918&fbclid=IwAR1LBmD2R_YUSfpLxQ3VcGtIed4QC5To9WA0ZO_LFAX4dAxkK3_21hhF7bU